After almost two years of working from home being the norm in Toronto, the once-bustling Financial District is starting to show signs of life, but it’s still a shell of its former self.

New holiday decorations have recently been installed throughout Canada’s economic heart, but with a lack of foot traffic still plaguing the area, these festive displays have only added a surreal seasonal overlay to the eerie ghost town vibe.

Toronto’s biggest and tallest office complexes have rolled out their annual decorations, and while some of the displays are admittedly stunning, they aren’t getting anywhere near the fanfare seen in the pre-pandemic days.

Few office workers are around to take in all of the bright and colourful cheer this year, with nearly 80 per cent of downtown employees still working from home, and trends unlikely to reverse with rising case counts. 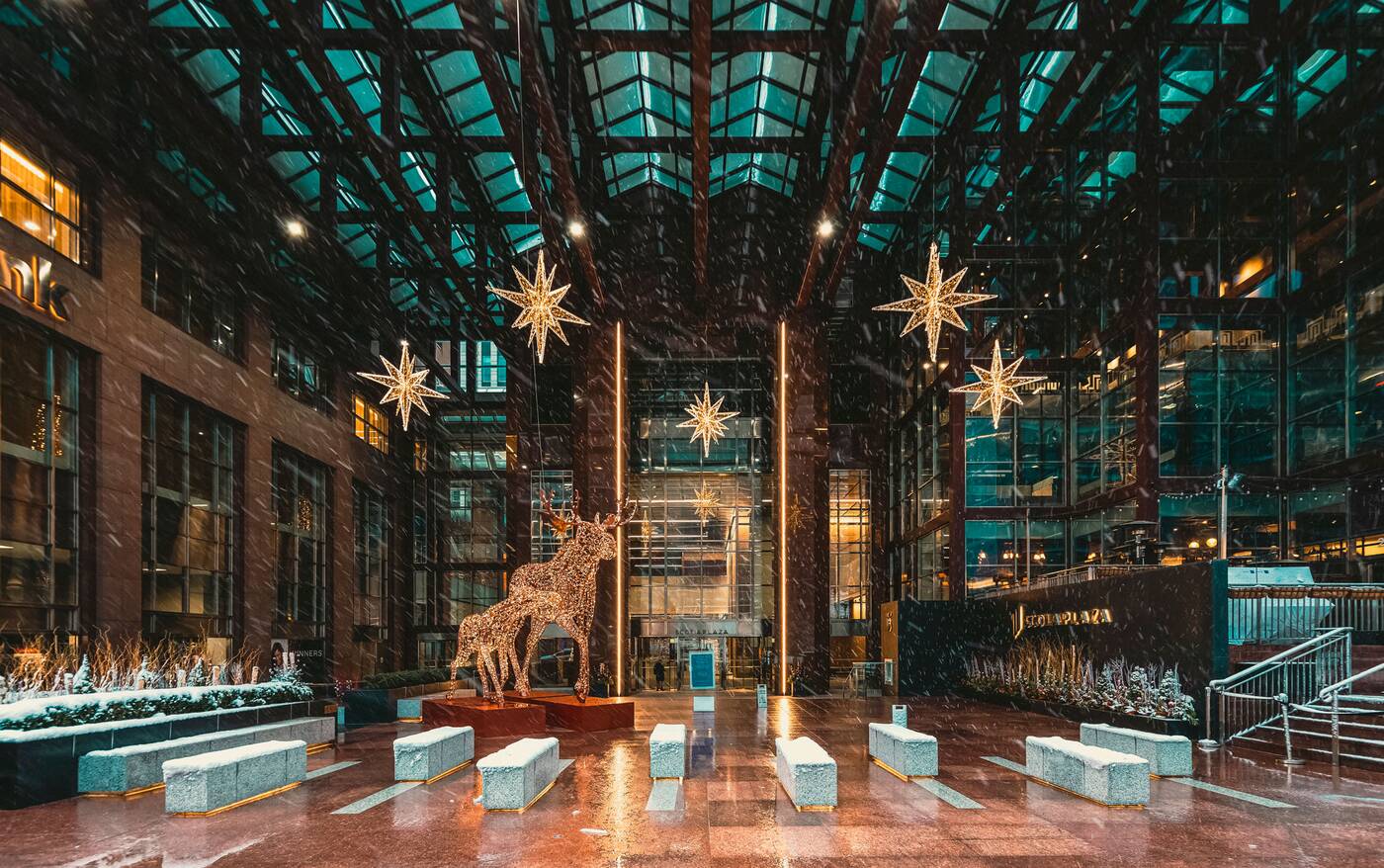 Scotia Plaza takes a minimalist approach with its holiday decor, though the theme remains unchanged from previous years. Photo by Jack Landau.

The Bay-Adelaide Centre, which is now completing its third and final office tower, looks especially dreary, its low-key display set up in the windswept Arnell Plaza, framed by the complex’s mostly-empty towers. 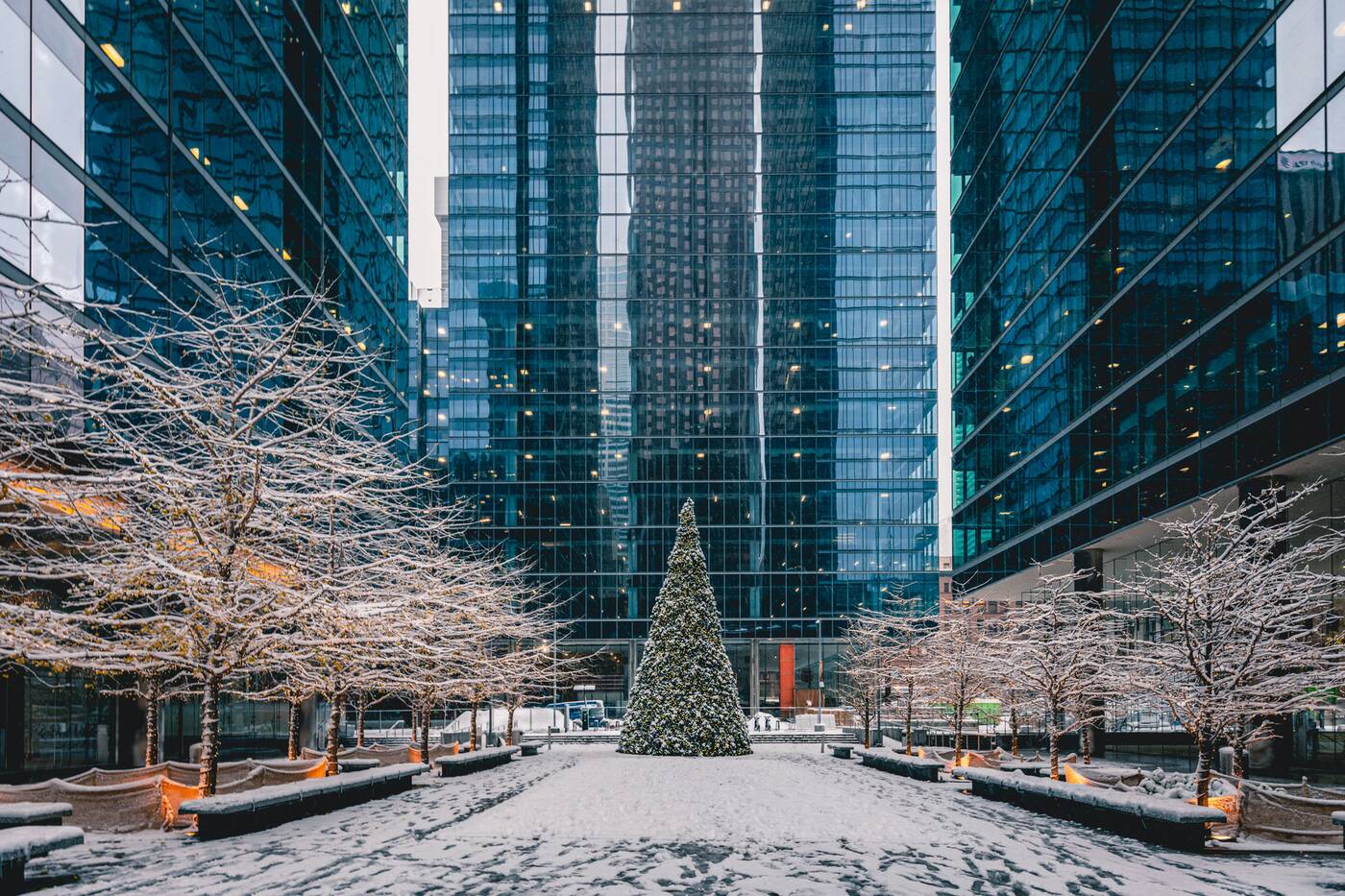 Lighting and a tree have been added to Arnell Plaza at the Bay Adelaide Centre. Photo by Jack Landau.

And if things seem grim above-ground, it’s looking even bleaker in the underground PATH system, where retailers have suffered disproportionate losses compared to businesses on the surface. 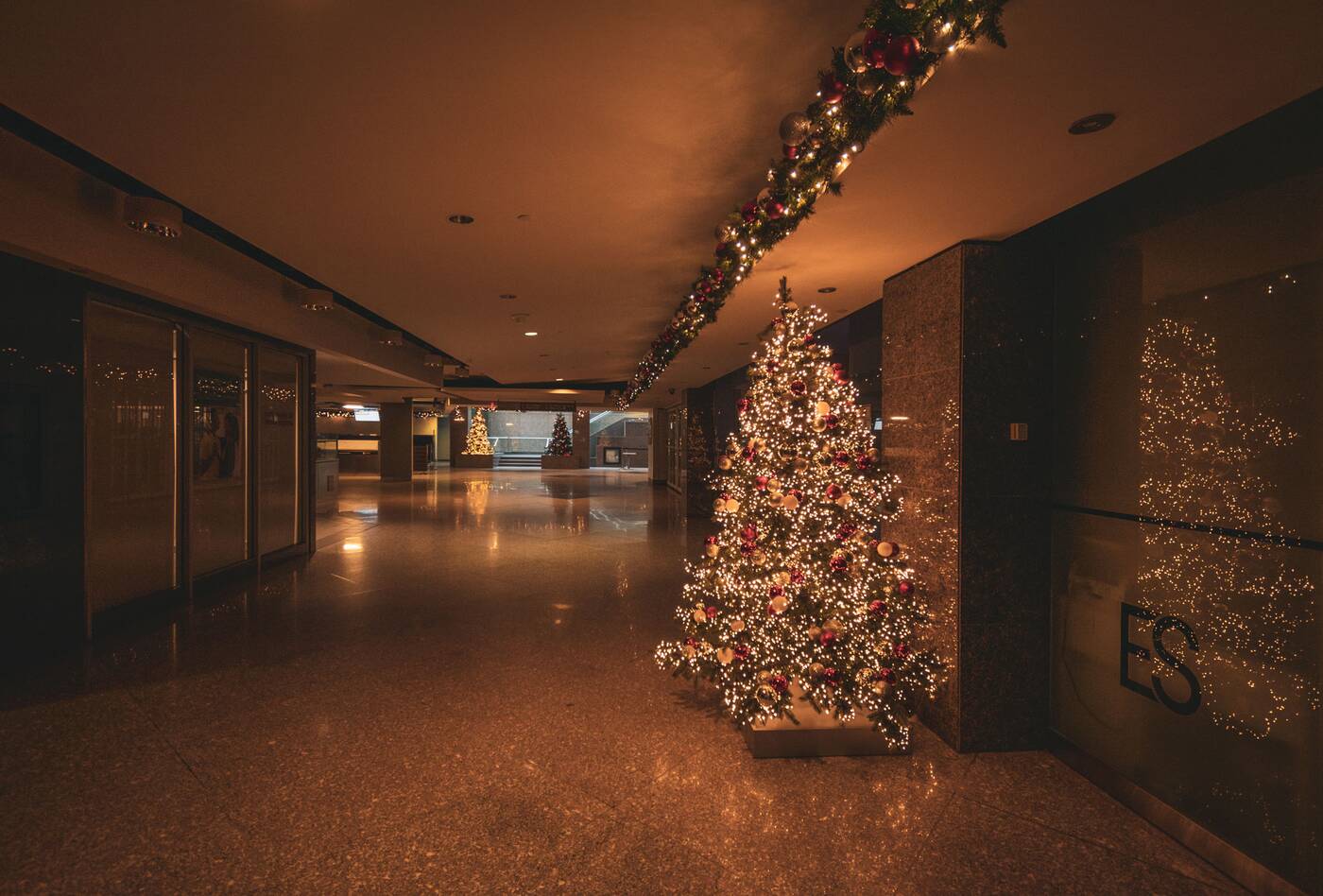 The PATH system has been gutted by lockdowns, its holiday decorations seen by few this year. Photo by Marc Mitanis.

Not all the holiday decor is drab and uninspiring, though, as many seem to be drawn towards the Allen Lambert Galleria at Brookfield Place, a constant hotspot for tourists and locals alike looking for that perfect seasonal photo. 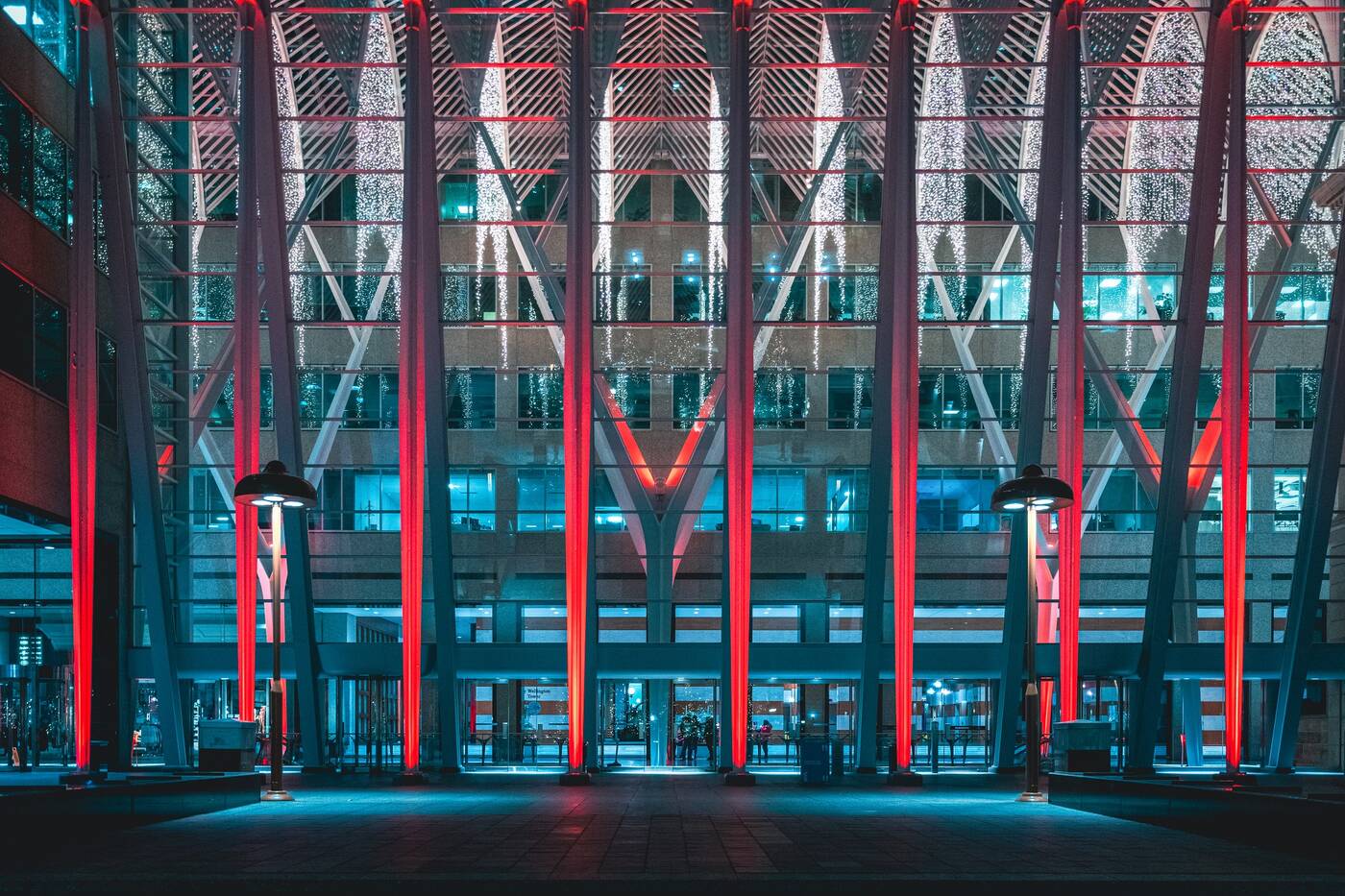 Known as the ‘Crystal Cathedral of Commerce,’ the galleria’s iconic design by Spanish architect Santiago Calatrava takes on a whole new feel during the holiday season, its soaring parabolic arched atrium decked out in strings of lights and bathed in a red glow. 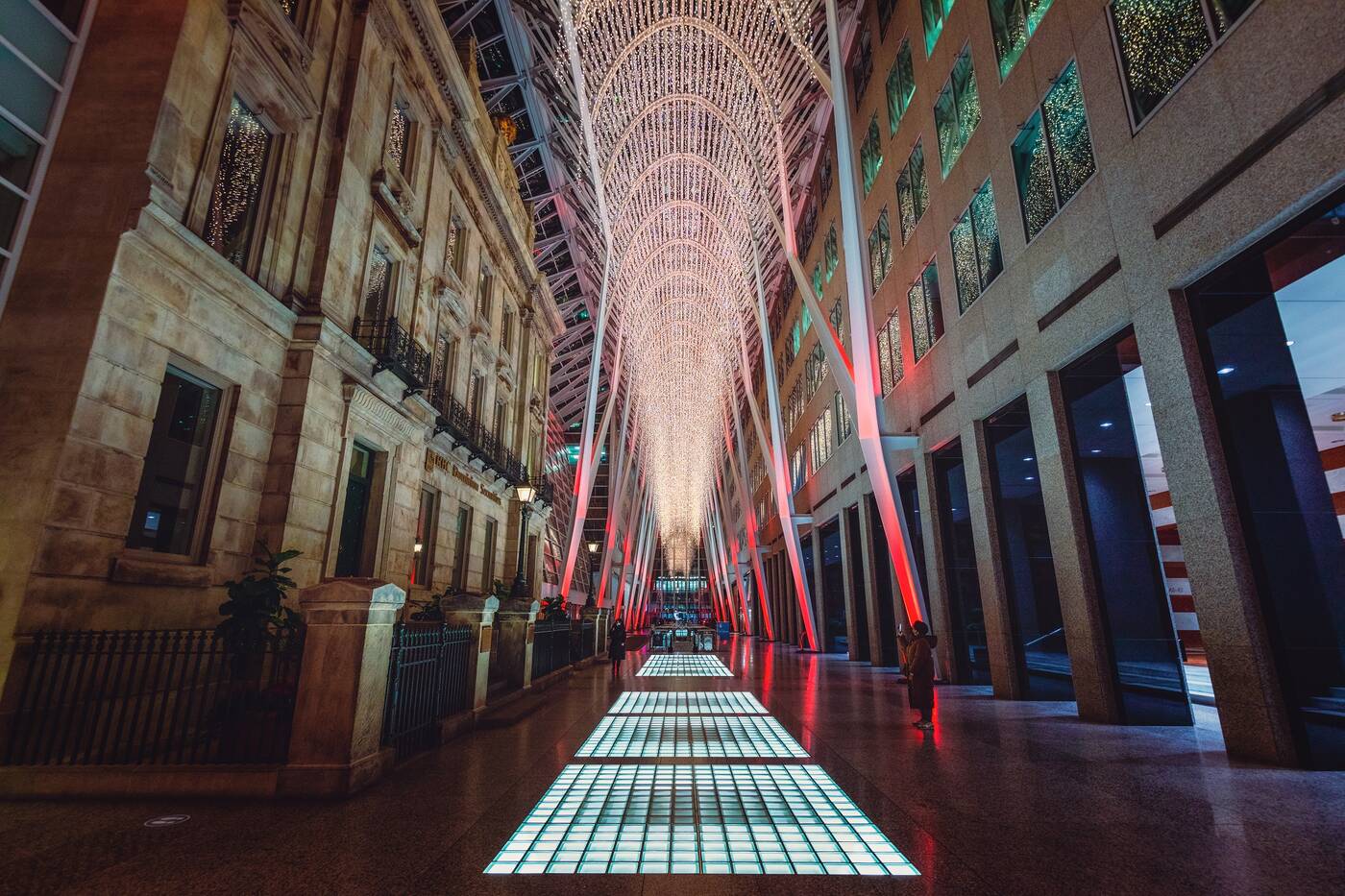 The Allen Lambert Galleria is one of the few Financial District destinations pulling in visitors from around the city. Photo by Jack Landau.

Despite a few street-level attractions pulling in shutterbugs, much of the Financial District above feels like a vertical, highly corporate version of a Scooby-Doo ghost town. And it could be this way for a while as the new Omicron variant arrives and a holiday wave of COVID-19 looms.