Almost anyone who’s ever worked in the hospitality industry, from fast food cashier to nightclub bartender to fine dining restaurant manager, can tell you a horrible story about puke.

It’s not like anyone plans to vomit all over a table when they head out for the night, but it happens — especially among the very, very drunk — and someone’s got to clean up the mess.

This in mind, a hip resto-bar in the Yonge and Eglinton area has rolled out a formal policy warning all guests that anyone who throws up on the premises will be charged a $50 cleaning fee “to ensure fairness to our fellow staff members.”

Better still? It’s only in effect for New Year’s Eve, which most people would argue is the worst of all calendar dates (tied with March 17) for belligerent and sloppy drunk behaviour. “Amateur night,” as industry folk call it.

“We used to have live music and dancing [before the pandemic], and typically when people are in that kind of vibe, eating and drinking, when they overdrink… they do vomit,” says Karan, the co-owner of Tamasha Indian Resto-Bar, of the policy.

“Even if it’s in the washroom, it’s outside the pot.” 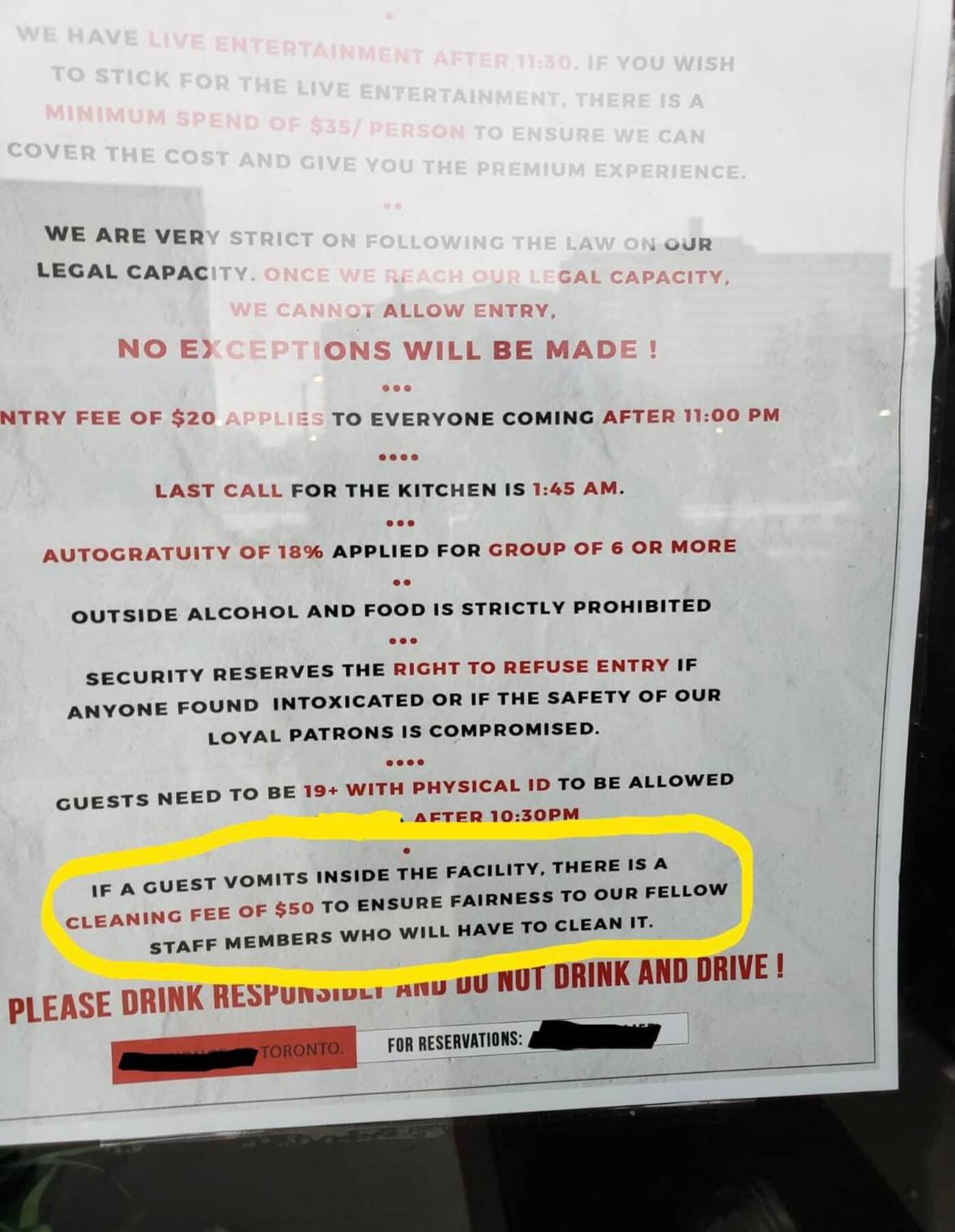 Tamasha isn’t playing around when it comes to protecting staff. Image via Bob Collins.

“It had happened two or three times and we were like, ‘this is enough’,” he said. “We felt like this was not part of the job description for a server…”

The idea with the policy was to ensure that whichever poor staffer was tasked with cleaning up someone else’s stomach contents on NYE got a $50 bonus, but to date nobody has actually been fined.

“We implemented this policy, and things really changed after that,” says Karan, noting that the restaurant hasn’t had any messy vomit situations arise since they put the rule in writing.

So, when advertising festivities for New Year’s Eve in 2020 and 2021, he and his partner decided to leave the disclaimer in place.

“It’s technically more of a warning rather than a fine,” he told blogTO. “But our intention is to charge if it happens.”

An images of a sign on the restaurant’s front door advertising the policy was posted within at least two large private Facebook groups (Weird Toronto and Food and Wine Industry Navigator) this week, winning praise from hundreds of commenters.

“As a professional cleaner of bars and restaurants, I am very appreciative of this! My staff too,” wrote one. “The nicest and most appreciated sign I’ve ever seen is hung in the bathrooms of one of my clients… Basically, it says: please help keep the washrooms clean and remember that another human being has to clean up this area after you. Be respectful.”

“I think it’s appropriate. We hosted a corporate Xmas party and our place is a nice, small restaurant (not a king west supper club) and someone vomited in the bathroom sink (like, it was full.),” wrote another.

“We only found it after the party had left… and one of our staff had to clean it up. I am totally for cleaning fees for people who can’t handle their liquor.”