It’s not news that this country is cold, but right now 11 of the top 15 coldest places in the world are actually in Canada. Brrr!

The site WX-Now keeps a running list of the coldest places in the world, and Canada has a lot of representation on it.

Maybe all those jokes about Canada being a giant frozen tundra aren’t as far off as we like to think they are.

Topping the list is Shepherd Bay, Nunavut, which is currently sitting at an eye-watering -38 C. If that’s too frigid, don’t worry, because the number two slot, Eureka, is a whole 2 degrees warmer at -36 C.

After those two Canadian spots is Crane Lake, Minnesota, sitting at around -36 C. As a matter of fact, most of the list flip-flops between places in Canada’s territories and Minnesota, U.S.

It’s not surprising, either, that after a week or so of terrible weather, a few spots in Ontario also made the list. This includes Wawa (-34 C) and Sioux Lookout (-33 C), taking the 8th and 10th spots, respectively. 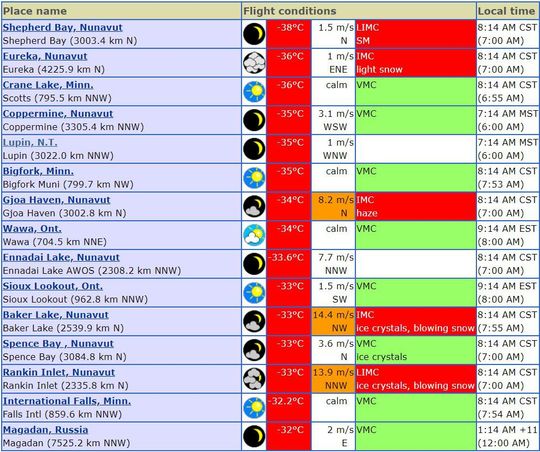