People are already squatting on usernames for Toronto Metropolitan University You’ve no doubt heard by this point that Ryerson University is changing its name to ‘Toronto Metropolitan University’ after years of pressure from advocates to disassociate the school from a 19th-century educator and minister who helped create residential schools in Canada.

The university, formerly known as Ryerson, announced the news on Tuesday, explaining that this name change will take place in phases. Phase one commenced with a successful board vote on Tuesday and involves the immediate adoption of the TMU moniker for all operational matters.

“For example, changes to webpages and social media handles can happen relatively quickly, while other changes, such as external signage on-campus buildings and amendments to legal documents, including degrees, will take longer.”

It would appear as though Lachemi and his colleagues may have underestimated the level of difficulty they would have in changing over said social media handles.

Within hours of the name change’s announcement, new TMU Twitter, Instagram and TikTok accounts started circulating in the city.

Ryerson didn’t create these handles. They’re owned by what cybercrime experts would refer to as “username squatters,” and there are quite a few of them.

Some accounts bearing the school’s new name or variations of it have completely blank profiles. Others, like @torontometrou_ on Instagram, suggest that they’re holding the accounts for ransom.

“This account can be sold in exchange for tuition expenses covered as well as additional school related expenses,” reads the bio of that account.

“DM to purchase,” reads the bio of a newly-created account with the handle @tmstudentunion.

An Instagram account with the username @torontometropolitanuniversity simply states in its bio that whoever owns it is “open to chat.”

There are no less than 30 accounts using variations of the school’s name on TikTok, several going so far as to display TMU’s new logo and some claiming to be official accounts.

“If u want the username, let’s talk money,” reads the bio for @torontometrouniversity on TikTok, where it uses a photo of Drake’s son Adonis as a profile pic.

“Formerly Ryerson University. Join us as we write our new chapter,” reads the bio for another, repeating the very words used in Ryerson’s announcement this week.

With its TMU logo and a handle of @toronto_metropolitan_u, the account almost looks legit… until you view its most-recent post, which includes the text “Toronto Mans University” and features an image of peepeepoopoo man. 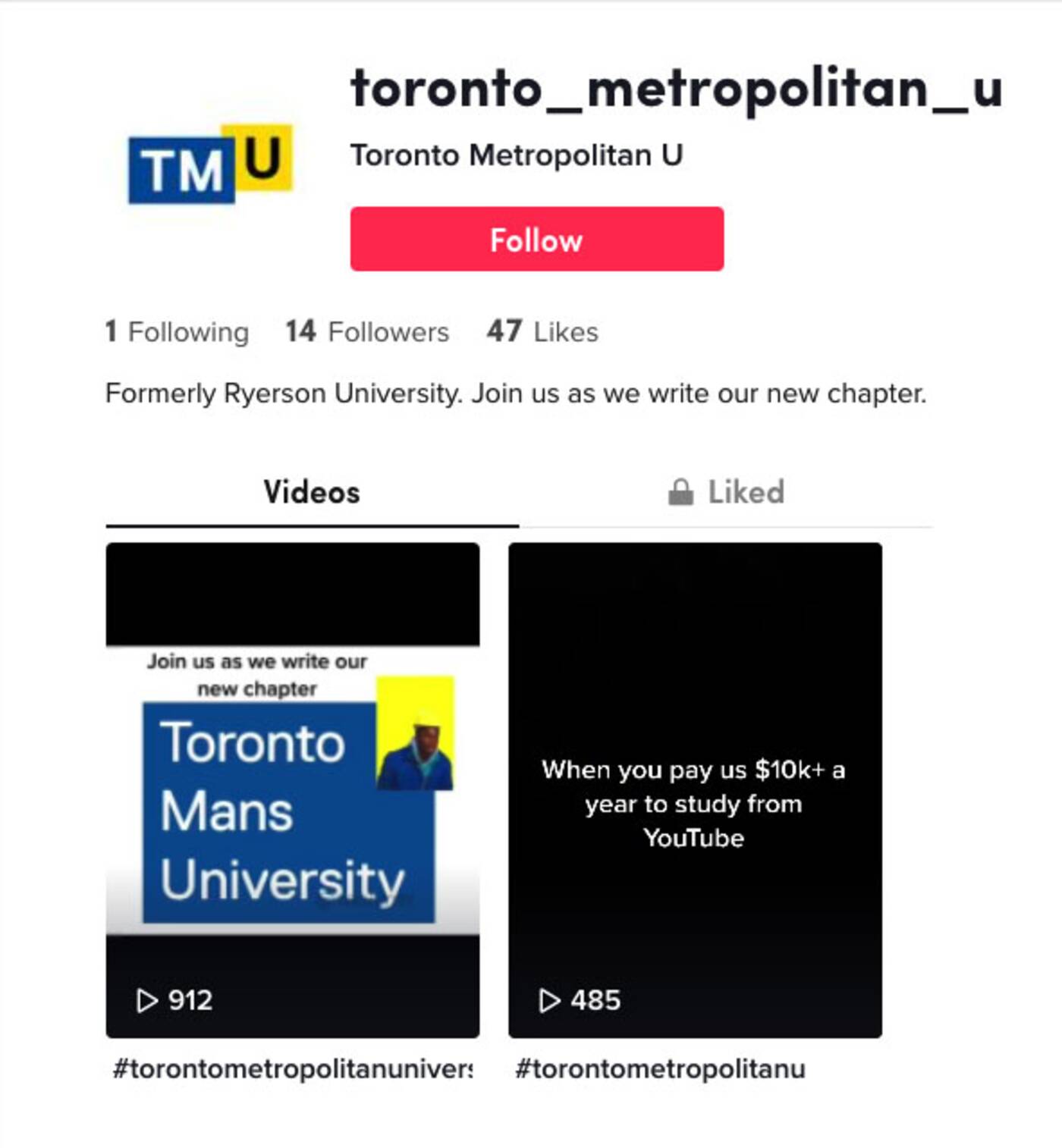 One of many new TikTok accounts created in the wake of Ryerson’s big name change announcement. Image via TikTok.

Some Twitter accounts that were initially circulating already appear to have been taken down. This is because username squatting is prohibited by Twitter’s Rules, particularly when there is any sort of trademark infringement attempt.

“Attempts to sell, buy, or solicit other forms of payment in exchange for usernames are also violations and may result in permanent account suspension,” reads Twitter’s help page.

Instagram also prohibits trademark violations, which it says “may involve using a company or business name, logo or other trademark-protected materials in a manner that may mislead or confuse others with regard to its brand or business affiliation.”

Those who simply have usernames and not profile pics or bios linking them to the university have little to worry about, however, as Instagram explicitly states that “usernames are provided on a first-come, first-served basis and may not be reserved.”

TikTok’s policies here aren’t clear, but the popular platform is definitely the most overrun with fake TMU accounts right now.

“Ryerson/ Toronto Metropolitan University accept me and pay all expenses,” reads the bio of an account with the handle @torontometro_uni and the TMU logo in its bio.

It’s highly unlikely that the school will cave to these demands, but you can’t blame a kid for trying.