This Opinion article is part of a Narcity Media series. The views expressed are the author’s own and do not necessarily reflect the views of Narcity Media.

Toronto has its share of reportedly haunted places, but one of the most notable is the historic mansion at 515 Jarvis Street.

Today, the mansion is home to the Keg Steakhouse (and is possibly one of their most stunning locations), but as reports from visitors and staff say, the building is also home to the paranormal.

I visited the Keg Mansion in Toronto with some friends for dinner, hoping to learn more about its haunting history (and maybe even see a ghost or two). Here’s why it was a spine-tingling meal.

The mansion was built in 1867 by Arthur McMaster, the nephew of William McMaster, aka the founder of McMaster University.

It was purchased by Hart Massey, the founder of Massey Hall, in 1882, and became a major social and political centre in the late 19th century, visited by dignitaries like King George IV and Queen Mary.

According to the restaurant, many “trials” befell the Massey family during their time at the mansion, which appear to have directly led to the paranormal activity witnessed by staff and patrons today — it’s said that unexplainable occurrences have been reported in the property since the 1950s.

The gothic-style building has arched entryways, castle-like features, grand staircases and fireplaces, and the exterior is covered in creeping vines.

It’s one of those places that just looks like it should be haunted.

One of the tales I had heard was of visitors to the restaurant seeing a woman in a washroom on the second floor of the mansion.

According to the Keg, Massey’s daughter — Lilian Massey — died on this floor, in what is now the women’s washroom but was once her bedroom.

The person serving us confirmed the story, saying that Lilian would sometimes be seen by patrons and staff, although our server had never seen anything paranormal themselves.

I did go to the second-floor bathroom during my visit, but I didn’t see any ghostly figures, although there were other people in the restroom at the same time.

It’s possible that any ghosts lurking there may only appear to those who find themselves in the washroom alone (which might be a good reason to go to the bathroom with a buddy).

Other ghostly occurrences at the restaurant, according to our server, have included flickering lights — a hallmark of paranormal activity, as any horror movie would have you believe.

Our group had noticed the lights flicker once before our server told us this. As they mentioned it, they flickered again, as if confirming it to be true.

While you’re dining at the restaurant you can ask your server for a book of ghost stories, which includes tales from former diners and staff about their experiences with otherworldly occurrences.

Some tell of bottles tipping off shelves on their own, while an entry from June 23, 2013, tells of a group who went to the restaurant’s third floor (which was closed off and used for storage during our visit) to try to communicate with a boy who is said to have died in the house.

The group, recording the encounter, was surprised to capture a boy answering a question of how old he was. In a faint voice, he replied “six.”

Another told a story of a boy (possibly the same one) seen playing on the stairs of the restaurant. As Vice reported in an article speaking with the manager of the Keg, the boy is said to have fallen down the stairs and died at some point after the Massey family had lived there.

While exploring the second floor of the restaurant, my friend and I stopped at an area off of the dining room where an oval opening allowed you to see down to the first floor.

For whatever reason, we stayed there a while and looked down at the scene below. 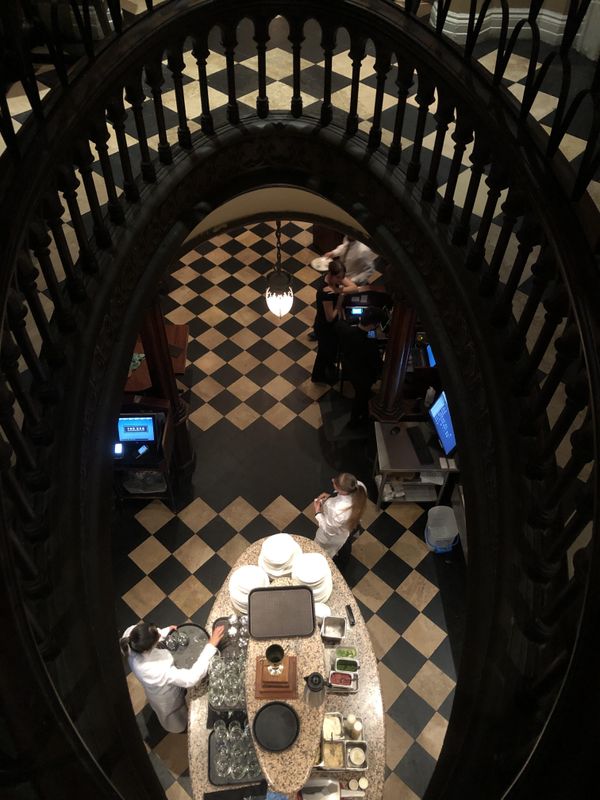 The second-floor oval opening at the Keg mansion.Katherine Caspersz | Narcity

When we returned to our table, our server told us that, chillingly, this area was a meaningful spot for one of the other notable ghosts of the mansion.

It’s said that a maid for the Massey family, deeply upset by Lilian’s death, hung herself from the second-floor oval opening.

According to the restaurant, an alternative story says that the maid had had an affair with one of the Masseys and had become pregnant, and hung herself to keep the pregnancy secret.

I definitely had chills after hearing this, just standing there myself moments ago.

Besides the ghosts that you may or may not see here, the Keg Mansion was a great spot for dinner.

Drinks were delicious (I enjoyed a particularly delicious blackberry daiquiri, while one of my friends had what I believe to be the perfect whisky sour) and the food was up to the Keg’s usual standards (I highly recommend the French onion soup, whether you like onions or not).

We ordered steaks all around, which were very good, and came with sides that were tasty and filling like baked potatoes, mixed veggies and rice.

For dessert, you can’t go wrong with a Billy Miner Pie, which my friends indulged in, while I — extremely full from dinner — enjoyed a mini crème brûlée.

In all, I’d definitely go back to the Keg Mansion. It’s a spot for a great meal and tasty drinks that doubles as a spooky location to visit ahead of Halloween.