Between all of the business closures, lockdown rules, sickness, death, exhaustion, boredom, and more horrors that the last 22 months have brought us, it’s no wonder that people in Canada (and worldwide) are not in the best place mentally or emotionally right now.

To underscore this reality, think tanks have decided to bring back an old metric used decades ago to measure distress, particularly economically, within a given place.

Relying primarily on joblessness and inflation rate data, the aptly named Misery Index has been applied amid the pandemic to assess how residents of various countries are faring during these unprecedentedly tough times in many regards.

And, for the second year in a row now, Canada has been named among the most “miserable” countries surveyed.

In 2021, the MacDonald-Laurier Institute gave Canada a “C” overall, which experts said indicated “a relatively poor performance in terms of reducing the misery of the pandemic.”

In that ranking, factors including vaccination numbers, testing and case numbers, stringency of lockdown restrictions and unemployment rates were taken into account, and Canada did not measure up, placing near the bottom of the list of 15 countries (when the bottom is a bad place to be).

Now, another Canadian organization has created a similar report, this time ranking Canada the sixth most miserable country out of 35 advanced economies worldwide.

“Canadians are rightly concerned about the country’s high inflation and unemployment rates, and when compared to other developed countries, Canada is not doing well,” wrote the Fraser Index in its newly-released study, Return of the Misery Index.

Governments across Canada, particularly the federal government, should prioritize those policies that will make Canadians less miserable by lowering inflation and unemployment.

The institute notes that inflation rates spiked in the nation last year and are expected to remain high for the rest of this year, which causes “genuine worry” about lasting price inflation, which Canadians are already seeing evidence of: gas and food costs have now hit a 30-year high.

Looking ahead, the country is forecasted this year to have the fourth highest inflation rate and the eighth highest unemployment rate among the 35 countries assessed. 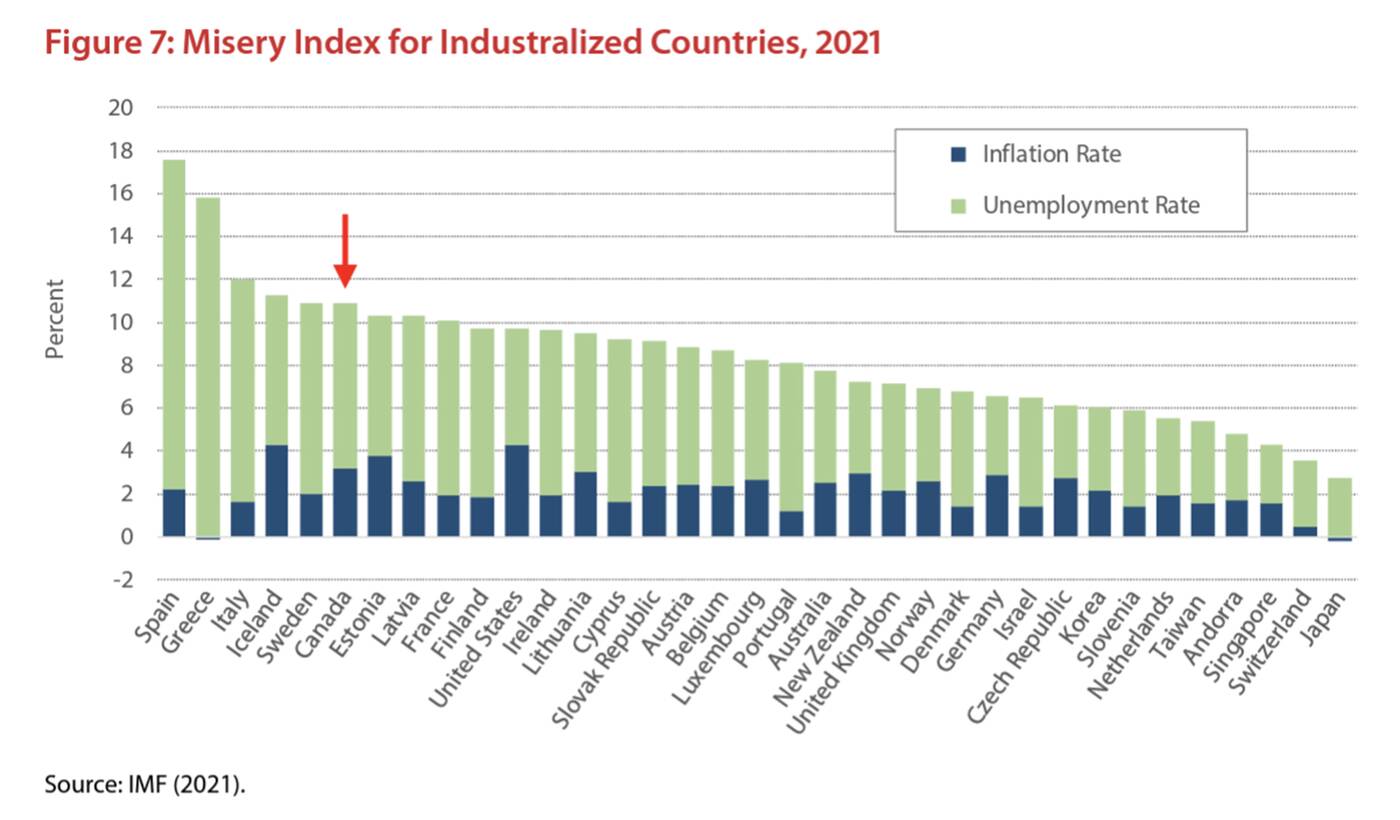 Canada was just ranked the sixth “most miserable” country compared to 34 peers when looking exclusively at the economic factors of unemployment and inflation rates. Chart from the Fraser Institute.

It is noteworthy that unlike the MacDonald-Laurier Institute index, this study only takes the two factors of inflation and unemployment into account, making it a true use of the traditional misery index and not one that is tailored to the specifics of the health crisis in other ways — so it indeed has its limitations.

There is also the fact that Iceland and Sweden, widely considered some of the best places to live in the world, ranked worse than Canada.

Plus, our home and native land was actually ranked the “best country in the world” in a report from U.S. News just a few weeks ago, while the reactions to the Fraser ranking online thus far show that people definitely do not agree with its findings.